It has been a busy day with little time for reading or reflection! But I have been reminded lately of the power of revision! I had the lovely opportunity to chat to a friend about life and some of the practical tools positive psychology has to offer. As we were talking I realised that you don’t just get it and have it, it has to be practiced again and again.

Each week I make sure I attend my Pilates class, it just helps to stop the aches and pains and keeps my ‘core’ strong.
If I skip a week it always surprises me how much harder it is and what strength is lost, it obviously needs to be done again and again.
I was reflecting that many of the good things in life are like that!

So along with this thought I am cutting and pasting a very early blog that I wrote on grit. May you enjoy it as you practice grit again and again!!

I have continued to think on the all important topic of grit!  It was very interesting! I was teaching in a year 6/7 class on Monday,  introduced the word ‘grit’ and  most kids had no idea of what it meant. I was then thinking about the general lifestyle of kids this age and wondered how much grit was needed?  I am still reflecting on that one and looking at my own kids! How often in this world of instant gratification, fast moving computer games and constant entertainment are kids needing to have grit? I have noticed in my own kids that when some learning situations get difficult, they respond differently.  Some keep going and some want to throw in the towel!

Last summer my daughter was involved in a treasure hunt!  A water melon had been buried in the sand at the beach.  It had been carefully buried within a certain boundry with landmarks noticed so that it would be found again and enjoyed for morning tea! Alas, despite these measures it was not found!

My daughter fits the quote that I read in an study by Duckworth, Peterson, Matthews and Kelly, titled “Grit: Perseverance and passion for long-term goals”.  “High achievers are thought to be triply blessed by ‘ability combined with zeal and with capacity for hard labour.”

She was not happy leaving the beach knowing that a watermelon was there!  That afternoon we all as a family trekked down to the beach with shovels for the search!  We set up a methodical way of digging turning the beach over and over!  After 45 minutes we all decided that someone had stolen it!  Someone had watched it being buried and then decided to dig it up!  But no, she kept going, adament that it had to be there somewhere.

Can you imagine the shrieks of delight when the shovel deflected in the sand and the green outer was seen! We were all ecstatic but none more than her!  The interesting thing: it was not her ability to dig that brought about sucess but the grit she showed! 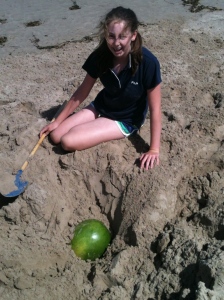 “Whereas disappointment or boredom signals to to others that it is time to change trajectory and cut losses, the gritty individual stays the course.” (the same paper as quoted above).

The hpothesis is that grit is essential to high achievement!

What do you think?